This southern summer, though I was on a working trip rather than a Patagonia vacation, one of my goals was to climb a volcano. My original idea was to strap on crampons to reach the crater of Chile’s Volcán Villarrica (Rukapillán to the indigenous Mapuche), near the resort town of Pucón, but a seismic alert that culminated in a startling eruption on March 3rd postponed that option.

I returned to Pucón a short while ago – with the volcano still smoking if not quite threatening – but in the interim I had found another option. While driving north on the Carretera Austral in Chile, I reached the town of Chaitén, recently resettled since a dramatic eruption of its own namesake volcano in May of 2008. The clouds of ash and a subsequent flood had forced its evacuation then.

When I visited the town a year later, the volcano was still smoking, with cars and houses nearly buried beneath the ash, and the southern beech forests of nearby Parque Pumalín – an audacious private conservation project – were nearly denuded.  This year, though, a lush green understory of ferns, rhubarb-like nalcas and shrubs surrounded the still pallid tree trunks – a handful of which had recovered – and the park had opened a trail to the rim of the volcano’s crater. 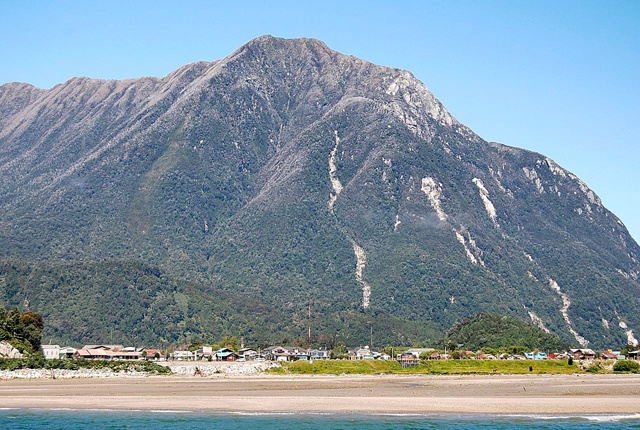 A misleading sign suggested a three-hour round-trip to the rim and back but, on a hot late-summer day in this usually cool damp climate, it took me twice that – especially given the steep staircases that comprised much of the trail, and the blisters I favored after another hike in Torres del Paine. Statistically, the climb was 600 meters in just 2.2 kilometers, a roughly 27 percent gradient, though it seemed even steeper and longer.

There were quite a few other hikers, several of them Argentines taking advantage of a three-day weekend to cross the border from the city of Esquel. When I reached the rim, at the same time as a couple young French sisters, we could see the smoke seeping from the crater and hear a low rumble.

Given the steepness and loose ash, the descent was trickier than the ascent, but less tiring. At the end of the day, I was glad to have done it, and glad that it was over, and I’m still hoping to tackle Villarrica the next time I’m in Pucón – presuming the threat of another eruption continues to recede.

Tips for traveling alone in Patagonia

Where to stay? What to do? What to look out for? These are the basic tips to keep in mind when ...

Enjoying a destination at a slow pace is a trend gaining more followers every year. What could be ...

How to choose good accommodation if you’re traveling alone

Making the decision to travel alone can lead to one of the best experiences of your life. It’s not ...

From the mysterious islands that make up the Chiloé archipelago to the majestic blue peaks of ...