Can you imagine cruising the Patagonian fjords between Puerto Montt and Puerto Natales in a ferry for 4 days and 3 nights? There are no two ways about it… you have to experience this unforgettable trip.

To give you an idea of what it’s like to glide through the channels of southern Chile and soak in its spectacular scenery, we spoke to Nelson Thollander Dolhabaratz, captain of the Evangelistas ferry, who’s in charge of Navimag’s Patagonian Fjords Route, who shared with us his impressions on the natural wonders that you’ll find along the way.

Captain Thollander knows Navimag’s Patagonian Fjords Route like the back of his hand. He’s been in charge of the Puerto Montt and Puerto Natales route for the last 5 years and has years of experience crossing the Patagonian straits, which are full of stories and ancient legends. What he loves most about his work is navigating the channels, which are calmer than the open sea, but still thrilling. 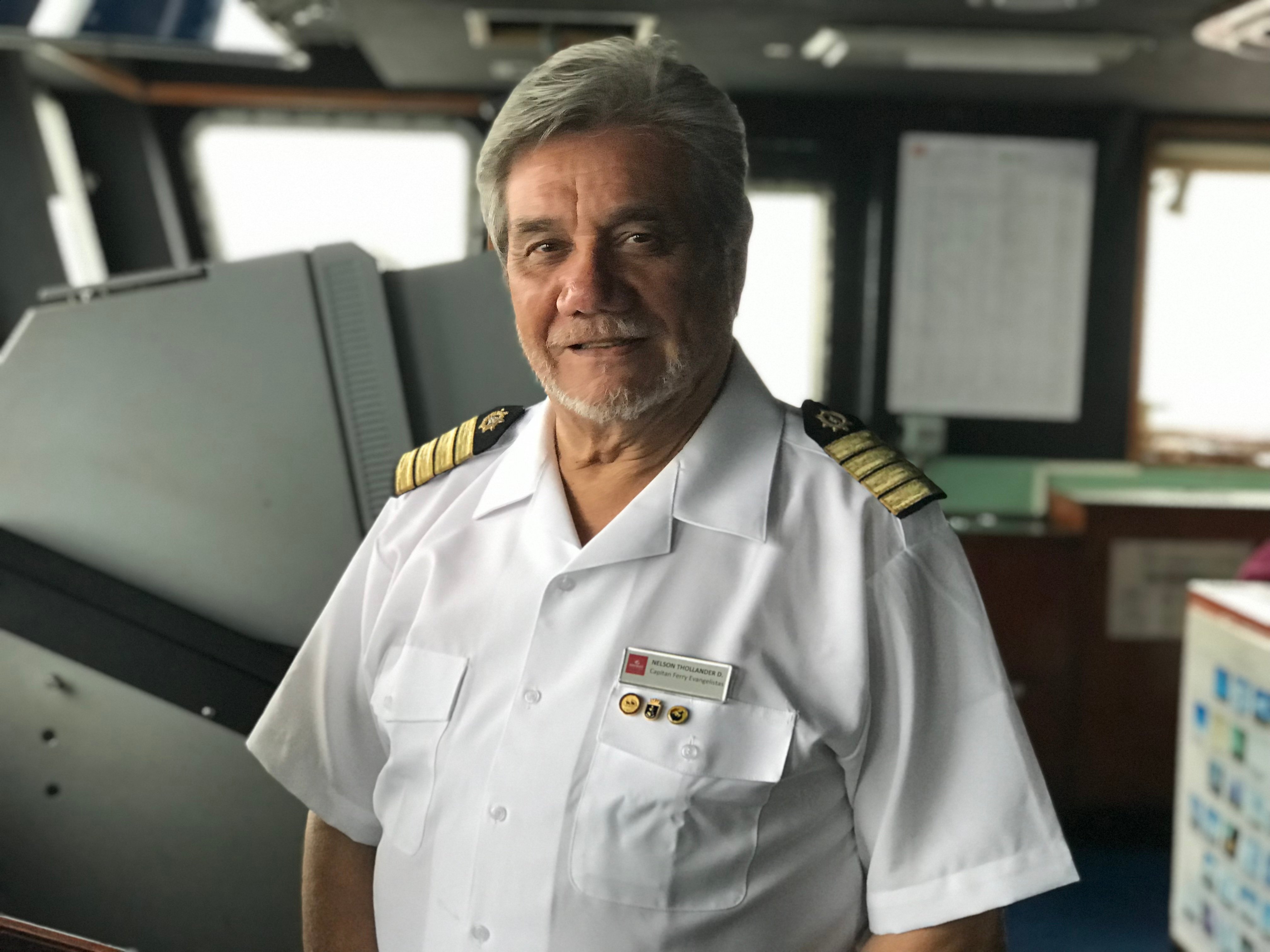 So take note of what this old "sea dog" has to say about the beauty spots on this Navimag route. You’ll be continually reaching for your camera and just blown away by the excellent views.

1. The advantage of navigating the fjords

Captain Thollander believes that it is better to cruise through channels rather than the open sea because the former are inland waters and always calmer. "At open sea, we could hit a bad weather front. It’s common for fronts to form in the ocean, as they come from Antarctica and then meet the warm air of the Pacific, forming rain and strong wind, which are dangerous in the open sea."

In contrast, navigating channels on a ferry is calmer even if there’s wind. "For me, as captain, it requires skill sailing through the fjords because in some places they are narrow, but I love that excitement and so do many tourists."

The Evangelistas ferry route from Puerto Montt to Puerto Natales offers many sights and experiences on the 4-day and 3-night journey.

"From setting sail at Puerto Montt, you enjoy the fjords of Chile; on leaving you can appreciate Isla Grande (the largest island of the Chiloé archipelago), the Osorno Volcano, the Calbuco Island, the Gulf of Corcovado and then you’ll see Melimoyu, a stratovolcano with an ice-filled caldera 40 km northeast of the small port of Puyuhuapi," says Captain Thollander. These landscapes are all awe-inspiring, he stresses.

After Melimoyu, the ferry enters the Moraleda Channel, offering an unparalleled 90-mile view of Chilote waters crisscrossed by the Guaitecas Islands and the Chonos Archipelago.

"The Moraleda Channel is interesting because it’s narrower, then there are the exits to the ocean where the most known channels are. The widest are the Ninualac and Darwin channels, where most of the cruises go," the captain adds.

For this veteran of Patagonian waters, the Pulluche Channel is one of the most extensive, but sometimes the climate gets in the way; it depends on good visibility and weather.

"People love the view and, on a good day, you’ll see the Coastal Mountain Range and the Andes beyond on one side and islands on the other. The beauty of this area is it always looks different; sometimes it’s misty, or sunny or maybe there’s a rainbow," he says.

Once past Coluche Channel, the real adventure begins! After the ferry rounds the Taita peninsula further south, it crosses the Gulf of Penas, a tricky area to navigate. "This is the most complicated part of the journey. For those who like adventure, it’s exciting to feel how the ferry pitches with the waves and how they pound the boat."

Then comes the Southern Patagonian Ice Field, which feeds into all the fjords and glaciers and can be seen from the ferry. "One of them is Calvo, which looks like a natural amphitheater of glaciers. On the route, before arriving in Puerto Natales, there are also glaciers that hang off the mountainside."

6. The mystery of the stranded ship

Captain Thellonder tells us that a little further south, back in the Patagonian channels, there’s a legendary stranded boat on Cotopaxi Bank.

According to the Ruta Chile website, at the beginning of 1889, the English ship Cotopaxi ran aground on Cotopaxi Bank, located in Messier Channel, opposite Williams Island. On the far north of Cotopaxi Bank, you can see the stranded Capitán Leonidas ship; a radar reflector and lighthouse have been installed on its deck to warn passing ships of the danger nearby.

Captain Thollander confirms that a ship called Cotopaxi "crashed" against the bank two centuries ago and now the area is called Cotopaxi Bank and the stranded vessel, Capitán Leonidas.

7. An historic port with 100 inhabitants

After a narrow channel, comes Puerto Edén, a charming fishing village of no more than 100 inhabitants. Kawésqar still live here, an Indigenous community that date back 6,000 years, according to Chile’s intangible cultural heritage management system Sigpa.

This part of the journey enthuses Captain Thollander: "They made a dock and there are no cars there, but they did create a space to allow an ambulance in, and they fixed a walkway that crosses the whole island. There’s a small school for a few children; it’s picturesque and when there’s snow it looks like an Alpine village."

We trust Captain Nelson Thollander’s testimony will inspire you to make this beautiful ferry trip through the Patagonia fjords between the cities of Puerto Montt and Puerto Natales.

Now you know what most of the route is like, we hope that you decide to come to southern Chile and experience the journey of your dreams in contact with nature.

Are you on a tight budget for your trip to Torres del Paine? There are many ways to spend less to ...

All you need to know before visiting Torres del Paine

Where should you start when planning your trip to Torres del Paine? What should you take or leave ...

4 locations to capture the best shots of Patagonia

It doesn’t matter whether you’re a professional photographer or want to upload pictures to your ...

3 good tips for a great trip to Torres del Paine

It is one of those trips you do once in a lifetime. Torres del Paine National Park is one of the ...

The 6 cities in Patagonia you must visit

If you are travelling to Patagonia, you’d probably like to go everywhere. However, as we told you ...

How to plan a trip to Patagonia